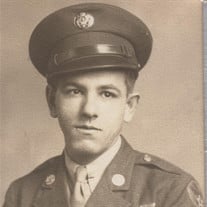 Alexander "Al" H. Doka Sr., age 96 of Millville, passed peacefully into the arms of Jesus on Friday, February 8, 2019. Loving family members were blessed to spend precious time with him as he transitioned to glory. Al was born in Philadelphia, PA to the late Alexander and Gertrude (Van Forsen) Doka, and he grew up in Clayton. In 1942, he enlisted in the United States Army Air Corps and served four years as a Staff Sergeant. In 1945, he was stationed on Iwo Jima for nine months with the 20th Air Force, and participated with the 7th Fighter Command, which included the 21st Fighter Group (Sun Setters), and the 72nd Fighter Squadron (Scalpers). Al received numerous medals, including the Silver Wings, Good Conduct Medal, American Campaign Medal, Asiatic-Pacific Medal, Pres/Unit Citation, Army of Occupation WWII Medal-Japan 1945, Victory World War II Medal, and the New Jersey Distinguished Service Medal. For 37 years, Al worked as a master engine mechanic for Airwork Corp. of Millville, and retired in 1984. Al was the Past Commander of the Veterans of Foreign Wars Bush-Kerrick, Post No. 2169, Past Commander of the 9th VFW District-Cumberland County, and the Past VFW Southern Conference Chairman of NJ. He was a former member of the Second United Methodist Church in Millville. He was also a former member of the Buckshutem Antlers Gunning Club for 18 years. Currently, he was a member of the Double Oaks Gunning Club in Lawrence Twp. For over 60 years, Al was an active bowler with many leagues. Al will be sadly missed by his sister Gertrude Chilliri; his daughter in law, grandchildren, great grandchildren, many nieces and nephews, great nieces and nephews, great great nieces and nephews, and many friends who loved him. He was predeceased by his loving wife Myrtle (Nee) Kiley; and two sons, Joseph and Alexander Jr. Funeral Services will be conducted at 11 a.m. on Thursday, February 14, 2019 in the Christy Funeral Home, 11 W. Broad Street, Millville. Family and friends will be received on Thursday from 9:30 to 11 a.m. in the funeral home. Burial, with military honors will be in Mt. Pleasant Cemetery, Millville. Memories and expressions of sympathy for Alexander Doka Sr. may be shared on the Obituary Tribute Wall at www.christyfuneralservice.com.

Alexander "Al" H. Doka Sr., age 96 of Millville, passed peacefully into the arms of Jesus on Friday, February 8, 2019. Loving family members were blessed to spend precious time with him as he transitioned to glory. Al was born in Philadelphia,... View Obituary & Service Information

The family of Alexander H. Doka Sr. created this Life Tributes page to make it easy to share your memories.