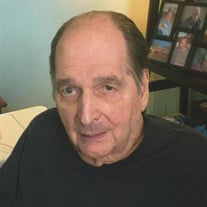 Albert G. Sammartino passed away on Thursday, August 31, 2017, at Veterans' Victory House in Walterboro, SC. Though he had been in declining health, his death was unexpected. A longtime Vineland resident, he was born in 1930 to the late Luisa and Vincenzo Sammartino, being the youngest of seven children. A graduate of Vineland High School, Class of 1948, he worked for RCA in Camden and then entered the Army. He was in the 180th Infantry Regiment during the Korean War. Honorably discharged in 1959 with the rank of Sergeant, he had received the Korean Service Medal, two bronze stars, a United Nations Service Medal, and a Combat Infantry Badge. In Vineland he owned and operated Royce Camera Shop at the corner of 7th and Landis Ave. He also owned The Snap Shop on High Street in Millville. He was a member of Sacred Heart Parish and a lifetime member of the Knights of Columbus. Albert is survived by his wife M. Ann Petronio Sammartino of Summerville, SC; his sister Angelina Bonanno; and his nieces and nephews, Ron Stringari, Gloria Castellini, Camie DeCriscio, Margaret Marsh, Mary Wanda Ronner, Vicky Plick, Jimmy Dalesandro, Donata Dalesandro, Bill Morris, Louise Jones, Kathi Morris, Patty Curran, Judy Miller, Steve Sammartino, Adrienne Sammartino, Joe Bonanno and John Bonanno. He was predeceased by his siblings, Frank Sammartino, Camille Stringari, Margaret Dalesandro, Palmina Morris, John Sammartino; and his nephew Larry Stringari. His memorial service was held in the chapel of The Parks Funeral Home in Summerville, SC. The family requests donations in memory of Al be made to Spirit and Truth Ministries, PO Box 89, Vineland, NJ 08362. Memories and expressions of sympathy for Albert Sammartino may be shared on the Obituary Tribute Wall at www.christyfuneralservice.com.

Albert G. Sammartino passed away on Thursday, August 31, 2017, at Veterans' Victory House in Walterboro, SC. Though he had been in declining health, his death was unexpected. A longtime Vineland resident, he was born in 1930 to the late Luisa... View Obituary & Service Information

The family of Albert G. Sammartino created this Life Tributes page to make it easy to share your memories.

Send flowers to the Sammartino family.