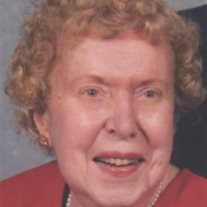 Agnes T. (Miloszewski) Labiak Miamidian, age 96 of Millville, passed away Friday evening, January 24, 2014 in the Millville Center after a brief illness. Born in Brooklyn, NY, she graduated high school, and lived there until moving to Vineland in 1940. She had lived in Millville since 1948. Agnes worked for Ebhardt Faber Pencil Co. in Brooklyn, NY. She then worked for Venice Maid and Kimball Glass as a secretary. She retired from the Millville Hospital where she worked for six years as a secretary in the billing department. She was also a homemaker. She was an active member of St. John Bosco Catholic Church of Millville. Agnes is survived by two stepsons, Leon Miamidian and wife Patricia of PA, and Raymond Miamidian and wife Madelyn of Utah; and her caretakers, Deacon Russell Davis and wife Susan, and Maggie DelVicario, all of Millville. She was predeceased by her two husbands, John P. Labiak in 1991, and Leon Miamidian in 2005; her son Daniel A. Labiak in 1983; her sister Freda Fay Lee in 1979; and her brothers and sisters in law on the Labiak side of the family, Peter, Joe, Anna and Catherine. A funeral liturgy will be celebrated at 11 a.m. on Wednesday, January 29, 2014 in St. John Bosco Catholic Church, 2 Hillcrest Ave., Millville. There will be a viewing on Wednesday from 9 to 10:30 a.m. in the Christy Funeral Home, 11 W. Broad Street, Millville. Burial will be in Holy Cross Cemetery, Millville. The family requests memorial contributions to be made in Agnes’ name to the Parish of All Saints, 621 Dock Street, Millville, NJ 08332. Memories and expressions of sympathy for Agnes Labiak Miamidian may be shared on the Obituary Tribute Wall at: www.christyfuneralservice.com.

The family of Agnes T. Labiak Miamidian created this Life Tributes page to make it easy to share your memories.