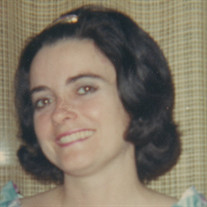 Adele P. Commander (nee Menz), 83, of Millville, passed away peacefully on July 4, 2014, after an extended illness. A lifelong Millville resident, Adele graduated valedictorian from Sacred Heart High School in 1948. She attended the Philadelphia Musical Academy, and offered her vocal talents in local church and community choirs. After her marriage to Paul Commander, she became a member of St. Nicholas Ukrainian Catholic Church, where she was the choir director for forty years. She acted as mistress of ceremonies for many years for the Chaika Ukrainian Dancers. She was a member of Beta Sigma Phi Sorority, The Sister of the Sacred Heart and St. Nicholas Ukrainian American Club at St. Nicholas Church. She will be greatly missed by family and friends. Adele started her career with Prudential Insurance Company. She took time off to raise her family, and went back to work as a bookkeeper at Millville Launderers and Dry Cleaners, eventually retiring from Cumberland County College as a librarian assistant. Adele was a devoted wife, mother, grandmother, and aunt. She will be missed for her many talents, including holupchi making and paska baking. She loved polka dancing, beach going, and watching the Phillies. She is survived by her son Peter Commander (Tammy); daughter Cindy Commander (Jamie Sherman); grandsons, Peter and William Commander and Theodore Sherman; her brother, Paul Menz; sister, Delores DeFilippis; and many nieces and nephews. She was predeceased by her husband Paul Commander; and son Christopher Commander. A Funeral Liturgy will be celebrated at 11 a.m. on Friday, July 11, 2014, at St. Nicholas Ukrainian Catholic Church, 801 Carmel Road, Millville. There will be a viewing on Thursday from 7 to 9 p.m. with a Parastas service beginning at 8 p.m. in the Christy Funeral Home, 11 W. Broad St., Millville. There will also be a viewing on Friday from 9:30 to 10:30 a.m. in the funeral home. Burial will be in the church cemetery. In lieu of flowers, donations may be made to St. Nicholas Ukrainian Catholic Church of Millville, or the Parish of All Saints Food Bank in Millville. Memories and expressions of sympathy for Adele may be shared on the obituary tribute wall at: www.christyfuneralservice.com.

The family of Adele P. Commander created this Life Tributes page to make it easy to share your memories.

Send flowers to the Commander family.